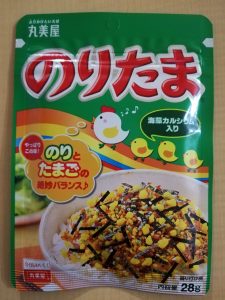 ‘Noritama’ is a sprinkle that was registered under the name ‘Marumiya Food Industry’. It is a combination of “Nori (seaweed)” and “Tamago (egg)” in Japanese. If it is Japanese, if you hear “Noritama”, it is a major item to know that “Ah, that sprinkling delicious” is not it. In other words, let’s ask if there is a suspicious person whether it is Japanese or not. “Do you like ‘Noritama’?”

For Japanese food, rice is life! There are, of course, plenty of foods that match that rice. Among them, the way people eat peculiar to the Japanese is “Tamago-Kake-Gohan (TKG)”. How, they will eat the raw egg on top of the rice. There may be many people with resistance, but Japanese eggs are very fresh, so if you are within the expiration date, you will not almost destroy your stomach. It is also a proof of the high quality of food distribution in our country. By the way, when my friend did TKG in a certain country in Southeast Asia, it seems that he had no friends. Because it is suicidal act, let’s stop outside Japan! Japan Banzai!

Egg flakes used for ‘Noritama’ are, of course, heat-treated and not raw, but the compatibility with the sweetness of eggs, reasonable saltiness, and Japanese ‘dashi’ (Japanese soup stock made from fish and kelp) are alive. Please try tasting the Japanese TKG culture by all means.

Like eggs, “seaweed” has been popular as a Japanese rice supplement. It seems that it was avoided in Europe and the United States from a black appearance until a while ago, but its awareness has also increased due to recent sushi boom and the like. It seems that there are still people who seem to be insects and still dislike seaweed. Such people miss the times. Please leave them alone…

In Japan, seaweed is not only Vinegared rice but also seaweed with soy sauce, eat wrapped in rice with chopsticks in dexterity. (On the contrary it may be dexterous to do with a knife and a fork!) Also, not only dried seaweed but also “Tsukudani* of Nori” has been eaten with rice from the long ago. There is a product with a name like “It’s rice!” Even though it is seaweed!

To you who loves toast it is also recommended to combine with garlic toast. The compatibility with butter and mayonnaise is also good. Sprinkle with Caesar Salad, the egg feeling is improved. Plain yoghurt, it tastes different from usual sweet taste! It might be good for cereal.

"toe" Official page toe is a Japanese post rock band that has bee...

After the hustle and bustle of Halloween, Japanese traditional eve...