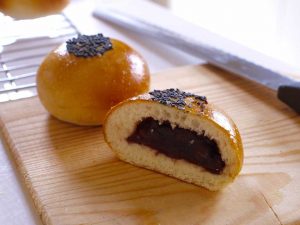 It has been popular in Japan since long ago, Anpan is always sold at bakeries, supermarkets and convenience stores. In my impression, the Sticking in criminal drama has image “canned coffee and anpan.”

Anpan was invented in a baker called Kimuraya in 1874. In the following year, when it donated it to the Emperor Meiji, after that, the Anpan spread widely nationwide. At that time, instead of yeast, fermented dough with liquor species and improved to fit the Japanese mouth. It can be said to be a representative example of “Japanese-Western cooking” by Japanese.

As the name is, the face part of Anpanman is made of anpan. He rushes to the person in trouble with the flying cloak, and hits the bad enemy “Baikinman”. By the way Anpanman’s face can be replaced! Because it is bread!

Japanese people like “Anpan” as much as anime. If you have the opportunity, please taste it!

"toe" Official page toe is a Japanese post rock band that has bee...

After the hustle and bustle of Halloween, Japanese traditional eve...