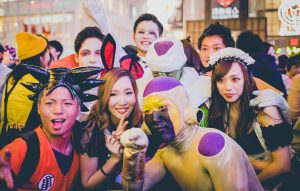 In recent years, Halloween is very exciting, especially in young people, in Japan.

Halloween popularity in Japan is Disney Land from 1997, Universal Japan from 2002

It is said that the event started.

It can be said that there were elements that the Japanese who originally liked the festival received.

It is a perfect event for those who like cosplay.

There seems to be a part of religious implications and the costume party element seems to be large.

In Tokyo Shibuya, there are times when you get confused, such as DJ police dispatching.

What is Noritama? Do not eat 'Noritama', do not talk about 'Fri...

Rice harvested every September - October will be on the market thi...

Japanese and salmon It is the salmon that always enters the hig...